VictorianKitty over at Sophistique Noir really propelled a terrific idea when she began coming up with these Monthly Theme Posts for bloggers to share the lovely contents of their wardrobes.

I've never done one of these themed posts before. I did want to partake of last month's boots theme, my trip to Europe was a hindrance to that goal.  While I could have just done the theme post ahead of time like all of the other posts that were published in that two-week period, I completely forgot.  I guess I could have uploaded photos from Vilnius, Lithuanian, but the only photos of boots I own that I could actually have taken a photo of were my ugly hiking boots.  Comfortable, but definitely not fashionable.

But I digress.  This month's theme is lace.  So I chose to feature not something that has a lace fringe (as there are quite a few pieces) but an eBay purchase I made a few months ago that caught my eye because of its lace features and its corset-inspired design: 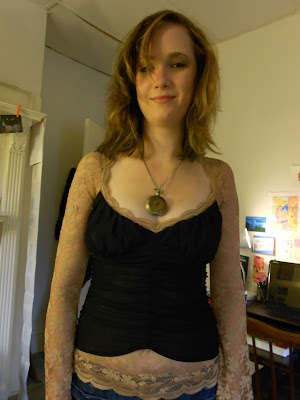 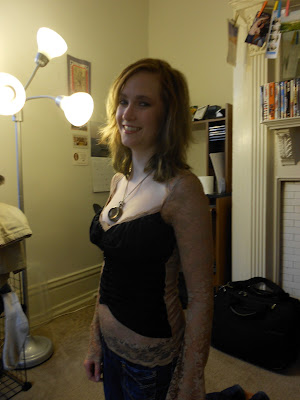 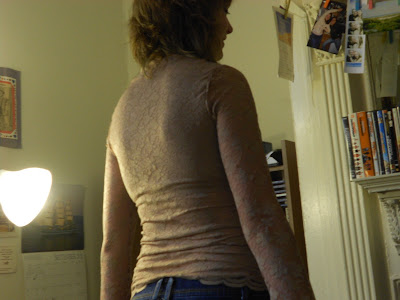 Despite the shirt being the equivalent of a size small instead of a size medium, this shirt is really nice for fall days when the sun is out and bright but is barely getting into the mid-60s.  It is also a great going out piece and keeps you covered up more so than most evening casual "going-out pieces."

As an aside, I really need to learn some photography skills or posing skills or something.  For one, the lighting in our apartment is terrible, so I tried to move lamps around to get better light, which doesn't seem to have work.ed.  So I think I need to designate a wall of this apartment as a "photography studio," where I can tack cloth and take photos that will actually come out better for you all to see the details.  Also, I've never been photogenic- most of my friends and my boyfriend have recognized this fact long ago.  I have no idea why I look so pear-shaped in the first photo.  In another photo that was not featured here I looked pregnant.  Any "modeling" advice?
Posted by Clementine Dahling at 4:14 PM

Email ThisBlogThis!Share to TwitterShare to FacebookShare to Pinterest
Categories: fashion